The film opens on Judith Myers (Breckingridge) meeting her boyfriend, Steve (Maslow) and they hear the back door open. Steve goes to check it out, and locks the door. He gets stabbed in the back twice. Judith turns to see her brother, Michael (Simpkins) wearing a mask and holding the bloody knife. She screams as she is stabbed in the chest. He's stabbing her again and keeps stabbing her. Their parents return home to see this. 17 years later, Michael (Mears) kills the gaurds and escapes the asylum. In Haddonfield, Laurie Strode (Stone) walks to school and finds Tommy (Simpkins) and they drop off things at the old Myers home. Laurie and her friends, Annie (Kunis) and Lynda (Belkin) are followed by Michael. Lynda insults him while Annie threatens him. Laurie makes them walk on. The girls talk about halloween and babysitting. As Laurie leaves her house, her mother (Howard) is attacked by Michael. She is killed.

Annie is baby-sitting Lindsay Wallace (King) and brings her to Tommy's house with Laurie. Annie's boyfriend, Robbie (Robinson) and they start making out, but Michael sneaks in and stabs Robbie. Annie runs for the door but is shoved down and stabbed twice. Lynda and her boyfriend, Jake (Peters) have sex in Lindsay's house, not noticing Annie and Robbie. Jake gets beer and is shoved against the door and pinned by the knife. Lynda sees this and tries escaping and calling Laurie. Michael breaks the door down and grabs her throat. She tries getting him to let go, but she falls back and is stabbed in the stomach. Laurie brings Lindsay home and sees Annie and Robbie. Annie is still alive and crying. Lindsay runs back to Tommy's house, screaming. Laurie finds Lynda and Jake and finds out Robbie's alive, too. She calls the cops and Annie screams as Michael stalks to Laurie. He shoves her into the counter and she flips over. He then grabs her and throws her out the glass door.

She limps to Tommy's and finds out the door is locked. She screams for the kids to let her in. They open it and lock it, but Myers busts the door down. They run up the stairs and the cops arrive, but they're killed. Michael grabs Laurie and takes her to his old house. She runs up the stairs and is forced down when the floor cracks and she falls down. She then runs outside and falls into the empty pool. He is about to kill Laurie, when a knife is stabbed into his neck. It is revealed to be Annie and Robbie. They help her up and start leading her up front. Annie is then stabbed by an ax. Robbie is thrown against the wall. Another cop comes by and Laurie screams for help. The cop starts shooting but is thrown on the fence and impaled. Laurie takes the gun and runs inside again. She goes to the second floor and holds the gun to Michael. Michael tackles her and they fall to the backyard. She points the gun to his head and fires. She limps to Robbie and they go back to Tommy and Lindsay. The police come and tell Laurie she's Michael Myers sister.

Steve - Stabbed in back twice.

Judith - Stabbed in chest, back, stonach.

Jake - impaled through chest with knife. 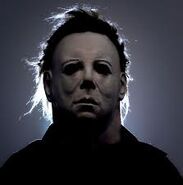 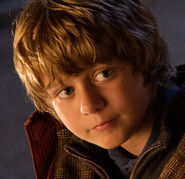 Judith Myers
Add a photo to this gallery
Retrieved from "https://fanon.fandom.com/wiki/Halloween_(2015_film)?oldid=346218"
Community content is available under CC-BY-SA unless otherwise noted.