When Elm Street is no longer scared of Freddy Krueger, he decides to haunt the streets of New York instead. Meanwhile, Jason Voorhes finds himself in New York after Camp Crystal Lake is destroyed by a fire after it gets struck by lightning during a freak storm, which also sends a truck that the "lifeless" Chucky doll is in off road, causing it to end up in New York as well. While Freddy is looking for some dreams to turn into nightmares, he meets Jason Voorhes. Freddy, thinking that Jason is trying to get revenge for the incident in the Devil's Playground, tries to kill Jason. Their battle leads them to the subway, where they meet Chucky. Freddy starts to think that the two have teamed up to kill him, so Freddy attacks Chucky too. The three destroy the subway during their battle. The police show up to stop the terrifying trio, so Freddy escapes, leving behind Chucky and Jason. The two finish off the police, and split up to find Freddy. Jason finds Freddy in an abandoned factory, where Freddy seemingly kills Jason by knocking tons of pipes, old jagged pieces of metal, and rusty old tools onto him. Meanwhile, Chucky goes on a killing spree, which gets the attention of the cops again. However, this time Freddy shows up to help him. Freddy kills the cops and makes a dea with Chucky. Chucky can have Elm Street if Freddy gets Manhattan. Chucky negotiates and ends up with all of California. Chucky agrees, and hitches a ride on a train. But it turns out Jason is on the train, and he kills Chucky. Jason jumps off of the train and heads back to Manhattan. At Manhattan, Freddy is already on a killing spree, but Jason shows up to stop him. Jason and Freddy have an epic battle, leading to the docks. At the docks, Chucky jumps out of the water, surprising Jason. Chucky slashes Jason's legs, kncoking him backwards into the water. Freddy and Chucky dive into the water and fight Jason. There underwater battle causes the dock to collapse onto all three of them, sinking them into the dark depths of the ocean. End credits scene: Chucky washes up on a beach in New Jersey. He wakes up and laughs as the screen fades out....

A sequel, Freddy Vs. Chucky Vs. Jason In New Jersey, was announced shortly after the film was released.

"How about I get California, you get Manhattan?" - Chucky, to Freddy. 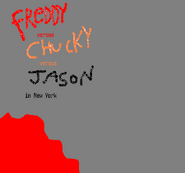 Add a photo to this gallery
Retrieved from "https://fanon.fandom.com/wiki/Freddy_Vs._Chucky_Vs._Jason_In_New_York?oldid=301428"
Community content is available under CC-BY-SA unless otherwise noted.