The Beatles A Diary: An Intimate Day by Day History By Barry Miles

Four Of Us is a 2021 future biopic film that focuses on the life and careers of The Beatles from their teen/college-age years, performing in the Cavern Club, the rise of Beatlemania and their post-concert years leading up to August of 1969 where they recorded together for the very last time with their album Abbey Road. Matthew Vaughn(Kick-Ass, X-Men: First Class and Kingsman: The Secret Service) and Dexter Fletcher(Eddie The Eagle) has been considered by a fan to direct. It stars impersonators from different tribute bands as The Beatles: Adam Hastings & Stephen Hill from The Bootleg Beatles as John Lennon & George Harrison(or George's son Dhani as his father) and Ardy Sarraf & Erik Fidel from The Fab Four as Paul McCartney & Ringo Starr with Benedict Cumberbatch as The Beatles manager Brian Epstein. Michael Fassbender and Paul Bettany have been consider to play Beatles producer and engineer George Martin by some fans. Most of the history is told out of the 2000 New York Times Best Seller The Beatles Anthology book By The Beatles, The Beatles A Diary: An Intimate Day by Day History By Barry Miles, Rock & Roll Comics: The Beatles Experience By Todd Loren with Mike Sagara And Lyndal Ferguson and the 1995 eight-part documentary The Beatles Anthology.

Adam Hastings as John Lennon, co-founder and leader of The Beatles and rhythm guitarist.

Ardy Sarraf as Paul McCartney, co-founder of The Beatles and Bass guitarist.

TBC as Neil Aspinall, Paul and George's friend from teenhood and The Beatles' road manager. 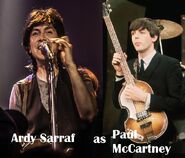 Secondary with Dhani Harrison
Add a photo to this gallery
Retrieved from "https://fanon.fandom.com/wiki/Four_Of_Us?oldid=397353"
Community content is available under CC-BY-SA unless otherwise noted.