At The New Fazbear's Fun frolic, Tyrone had possessed a Freddy Fazbear suit that had one eye ripped off (to tell the difference between Freddy and Tyrone). Phone Guy gives advice to Tyrone's brother who takes the job. During night 5, Phone Guy reveals his suspicions of what happened to Tyrone, and asked his brother to plant a tiny bomb into the animatronic on night 6. He does so, but on night 7, Tyrone comes into his office and waves at his brother (while Freddy is watching from the closet and laughing) as he blows up, taking his brother with him. The restaurant is shutdown, and Phone Guy is arrested for plotting the destruction of Tyrone (company property by the newspaper) but is let out a week later due to there being no proof. 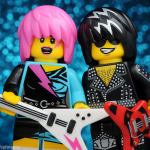