Fifth Annabelle was the fifth incarnation of Annabelle Sullivan. She was born on the 10th century with supernatural powers.

She has pale skin, blonde hair and blue eyes. She had brown spots on her back, which was her birthmark.

In her true form, she has bright blue eyes and pale rainbow skin. She has white wings like an angel.

In her angel form, she has silver eyes and pale skin with white sparkles all over her limbs specially for her arms, hands, feet and legs. She also had white wings like an angel.

She wears a white gown, white limb gloves and gray heels. She has long, blonde hair with a white halo.

She wears a white dress, white limb gloves, gray striped stockings and gray heels. She has long, blonde hair with a white halo. 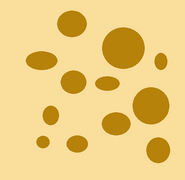 Angel Form
Add a photo to this gallery

Retrieved from "https://fanon.fandom.com/wiki/Fifth_Annabelle_Sullivan?oldid=185631"
Community content is available under CC-BY-SA unless otherwise noted.