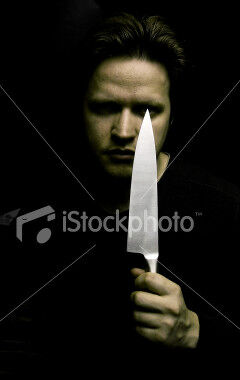 The flim starts off with a guy dying his hair and having his beard off. The man then takes a breifcase and walks past his dead wife and leaves the house. Reccently devorsed Sally mets widower Vincent at a gas station. Vincent gives Sally's son Phillip weird looks as he helps Sally find what she's looking for at the store. Phillip leaves the store and stays in the car. Philllip calls his older brother Nate who lives with his Dad Ben and tells him that Sally met this weird guy at the store.

A year later Vincent lives with them and Nate moved back in. Nate, Phillip and there sister Ceila dose not like Vincent at all and dosen't talk to him. Amercia's Most Wanted comes on and there's a picture that looks like Vincent and Ceila tells her brothers. Vincent comes into Phillips room and tells him that he never liked Phillip, Nate and Ceila. Phillip calls Vincent an asshole and Vincent grabs Phillip wich Nate witness.

Nate and Phillip tell Sally and she dosen't believe them. Phillip packs up his stuff and tries to leave but Vincent blocks the door. Nate tells Vincent to move and he dose and Phillip runs to his father's house and tells him about Vincent. Ben is pissed off about this and tells Sally that he wonts custdoy of Ceila full time and tells Nate to move back. Nate dose and a few months later Ben gets custody of Ceila. Nate throws a Birthday Party at Ben's house and he relutcantly invites his Mom afraid that she'll bring Vincent. Vincent dose come and Nate ignores him and Vincent walks to Philliip and Ceila.

Phillip tells Ceila to run but Vincent moves in her way. Vincent starts to threatn them when Ben puts a stop to it and kicks him out punching him in the face. When the party is over Vincent sneaks into the house with a crowbar. Phillip is doing his homewrok in the kitchen, Nate and Abby are outside having sex, Ceila is listing to her iPod and Ben is watching poron. Phillip here's Vincent and runs and hides in the basement.

Nate and Abby walk in to the house and catches Vincent. Vincent makes them go into the basment along with Ceila who comes downstairrs. He locks them in the basement. Vincent then goes upstairrs and sneaks up on Ben but Ben turns around in time and Vincent hits the computer instead. Ben fights with Vincent and Vincent ends up putting Ben in the basement.