Start a Wiki
Family Ties is the third book in the Club Dead Series. 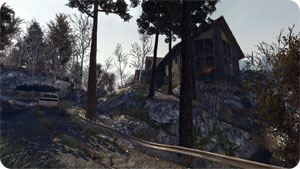 The book starts off with Erick sitting in a car in the middle of the night while its rainning outside. Barbie comes back to the car and they start driving. There driving to Lousiville Kentucky. Barbie tells Erick that he was adopted and that there going to met his real family. Erick is shocked and asked how long they have to be in hidding. Brabie says he dosen't know and in the meantime there going to stay at Erick's real family's house. Barbie takes Erick to his Mom and Dad's work which is Panera Bread. His meets his Mom Daphne and his Dad Theo who couldn't keep Erick beacuse the vampire hunters wanted him killed so Daphne and Theo gave him to Woody and Shaileene who are missing along with step brother and sister Lou and Hanna.

Meanwhile the Club Dead are being held kidnapped at a compound on that island and are free to move away. Blaze tells him that he plans on escaping if any one else decides to come with him and they all vote on going. Erick sits outside of the restraunt and Barbie finds him. Erick wants to know if the Club Dead ir dead or not. Barbie says that he thinks his sister Tris who can see the future can help them. They follow Theo and Daphne to there large estaste. Erick has severel older siblings Tris, Fred, Stefan, Jace and Ty. Daphne tells him that his cousins and family friends live on the property.

Tris tells them that Club Dead right now has a paln to escape the next time one of the guards check on them and that they will escape without anyone of them getting wounded or hurt. Barbie tells Erick that he will look out after him and Erick kisses a stunned Brabie who gives in. Erick mets his aunt Jennifer and his uncle Benny and there kids Meredith, Mackenzi, Ansel. He also befreinds the other kids on the island which are Faith, Destiney, NayNa, Wanda, Ashley, Sadie and Kara.

A guard comes to check on Club Dead and Blaze and his brothers ambush them and grab a gun. Blaze shoots his way through the guards. Tris gets Erick and Barbie and tells them that there escaping now and she pulls out her Crystal Ball and it shows Blaze and Patrick killing the guards. The Club Dead fight there way out the compound and get on one of the boats and escapes from the island. Erick tells Barbie that they need to bring Club Dead here and asks his parents about it.

Barbie said that he could bring them back here and that he will do anything for him. Erick kisses him again and asks why he started liking him now. Brabie said he didn't and said that he liked Erick when he first got here. Tris tells Barbie that they just arrived in Cape Cora. Barbie leaves kissing Erick again. Meanwhile Erick gos down to the lake and goes swimming with his brothers. After using the bathroom Erick starres at himself in the mirror to long causing it to shatter.

Barbie and Club Dead arrives and Erick gretts them and Blaze says that he can't date Erick even though what happend. Erick tells him that he is with Barbie. Blaze dosen't want Erick to be with Blaze and tells Barbie and Barbie tells him to get over it and Blaze threatns to rip his heart out. Erick tells Barbie what happend with the mirror and Barbie tells him to show him and Erick finds another mirror and shatters it just by starring at.

Barbie and Erick tell Patrick and his siblings think that Erick is teleknetic which gives Erick an advantage at killing the hunters if they came. Blaze is suprised that Fred is Erick's real boyfriend beacuse he and Fred had a fling last summer. Alex and Lance tell Erick that they missed him for somereason. Erick tells Blaze and Blaze says that there starting to remeber but not everything.

The Vampire King of Kentucky Bill King comes to the Estate and warns the vampires that the Hunters are coming. Bill tells them that if they are not killed then they have to leave the state. Tris looks into the future and seees that the hunters are coming in two days. The vampires find a place on the property to train and fight. During training Barbie tells him that all of his siblings and him were created by an experiment beacuse there parents were scentists so they tried it out on there kids and they turnded into vampires.

In the morning Blaze and Barbie stop fighting and Balze overheres Erick tell Barbie that he loves her and Erick makes out with Blaze and Blaze has fallen in love with Erick. Barbie finds out about the kiss but is not upset but Erick is in more love with Barbie then Blaze. When the hunters come the vampires kill them and Erick, Blaze and Barbie follow Norman and after a fight kill him. Alex gets wounded durning the fight and is about to die. Erick goes to see him and Alex remebers everything getting his memorey back.

Alex then dies and Erick cries nere him and unaware that hes using teleknetic power and briings Alex back to life with his previous injuries gone. Lance finds Erick and his memorey is back and Erick tells them that he has to go away.

Retrieved from "https://fanon.fandom.com/wiki/Family_Ties?oldid=203952"
Community content is available under CC-BY-SA unless otherwise noted.