Family Guy is a 2019 American live-action comedy film based on the TV series of the same name. It is directed, written and produced by Seth MacFarlane. There will be a sequel called The Cleveland Movie.

As a child, Peter Griffin befriends a talking dog named Brian. 30 Years later, he and Brian spend the rest of their lives, hanging out with friends and family. But when Brian is kidnapped by a fugitive, Peter and his friends go on a mission to save Brian.

In 1982, 12-year-old Peter Griffin (David Mazouz) is an outcast that is not popular in his town called Quahog, a city filled with comedy. When goes home, he finds a injured dog in the trash and names him Brian. Before he goes to bed, he wishes Brian can talk and the next morning, the wish came true that Brian can talk and has the mind of a human. Peter and Brian are now brothers. 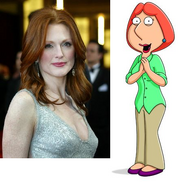