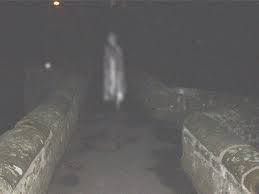 After several strange occurences around the Fuller's property they call in a exorcist and his team to stay at the house and stop the posseion of there young daughter. All caught on camera with an ending so shocking and terryfying it'll leave you shakinng and screaming.

On Halloween night Lexi, Tyler, Maddie and her boyfriend Bradley go tricking treating in town. They come home and Lexi says she wants to go to the new neighboors. There's only two houses out where the Fullers live at. Everyone says there too tiered to go over there so Lexi go's over there with no cameras. After Lexi has been there several hours Bradley, Tyler, and Maddie walk to the house and the door is wide open. The lights are out and Maddie and Bradley go to the basemnet while Tyler inspects the hall.

Tyler feels something breathing down his neck and you can see in the background a demon woman. Tyler drops his camera and runs into the basment. A demon little girl picks up the camera and skips around the house. Bradely grabs Tyler and they all three see Lexi lying under an old bed. Bradley touches her and Lexi attacks them but she quickly regains her memory but she dosen't remeber what happend.

They leave the basemnet and run into Tess(demon woman) and Earl Jenkins the new neighboors. They leave the hose and bring Lexi back to the house. Bradley shows Jonhthan and Kate(her parents) the footage and they call in a team of paranormol invistagaters Jude, Dakota and Emily. Jude is the exorcist, Emily records the sounds and Dakota flims. Jonhthan and Kate tell them to stay at the guest house. That night Jude investagates Lexi and he preforms an exorcism on her in her bedroom.

Demons scream and yell from all over the bedrrom and the bed is pushed into Jude. Lexi jumps out the window and runs to the barn. They all chase her to the barn inculding Johnthan, Kate, Maddie and Tyler and she claims that she is possessied by all the powerful demons in hell inculdingh the devil himslef and unleashes deadly screams and growls and black smoke comes out of her mouth before she passes out. Lexi wakes up as herself and they put her to bed.

Jude tells Johnathan that he will try to do another one tomorrow. In the middle of the night Lexi walks to the guesthouse with her camera. She walks in and watches Jude whille he's sleeping. Jude wakes up and see's Lexi standing in front of him. Lexi falls backwards when Dakota and Emily come in. Lexi wakes up and Johnathan locks her up in the room. Tyler shows Jude, Dakota and Emily the video of Lexi on Halloween. Jude, Dakota and Emily go over there and find Lexi playing with the two little girls Haley and Sherry. Tess and Earl tells them that Lexi came into the house to get candy and use the bathroom. Jude knows that there lying they come to the house and Bradley comes over.

By nightfall Bradley is still there and they can here yelling from upstairrs and tehy go up there and open the door to Lexi's room. She's not there and they look around and can't find her. They search the house and still can't find he and Jude and the otehrs go to Tess and Earl's house and they find Lexi there. Jonthan locks Lexi in her room and tells her that she can't go over there anymore at night.

In the middle of the night everyone is woken up by banging from Lexi's room. They open the door when the banging stops and they enter the room and find Lexi with her back to the ceilng. She comes down and pushes them out of the way and runs downstairrs. They find her outside and she has her arms outstreched and she's starring up at the moon.

She turns around and she's back to normol and Jonhthan says they have to do one last exorcism since they couldn't do it today. In the morning Lexi ties herself to a post in the barn by a chain for the exorcisim. They start the exorcisim and they all can see the devil in the corner. He disappers and then Lexi's starts moving in a way human is not sopossed too. Lexi in the devil's voice tells them that he'll let Lexi go if they give her a blow job. Tyler asks where's his sister is at and the devil says she's being raped in in hell.

Johnthan unotcied by the others walks up behind Lexi and bashes her head with a hammer knocking her unconsious. Lexi wakes up human and the injuries are gone. Lexi tells Jude, Dakota and Emily to stay at a hotel or else. They lisetn and leave at nightime but then they turn around thinking something big is going to happen. They drive in and the house is pitch dark. They come in and the house is covers in satnist signs.

They run to the Jenkins house and find it dark and they too have satnoist signs also. They here a door slam shut nereby and they slowly go into the basment and find Lexi in the corner her body shaking. She turns around when there close and attacks them and they leave the basment and lock it. Dakota see's Maddie dresed in dark clothes outside o the house starring at them. She then walks into the woods.

They here a noise from upstairrs and Jude and Emily  go up there while Dakota stays downstairrs. Dakota looks up ahead of him and see's Tess. Tess runs down the hall screaming at him and Dakota gets thrown out the window and passes out on the ground. Jude and Emily heard the crash and heads to the starewell and see's Lexi crawlng up the steps twoards them. Jude and Emily run into anotehr room and open the closet but Haley and Sherry are demons and they scream at them.

Jude and Emily break the window and they get on the roof. They see Dakota passed out on the grouns. They jump down to the lower level then on the grass. They wake Dakota up and they run to the van but they trahsed there van up where it can't work. Emily see's a bonfire and dark figures in the field nereby. They walk up to the field and hide in the bushes where they see Johnthan, Kate,Bradley, Tyler, Lexi, Tess, Jude, Maddie, Sherry and Haley walking around the fire in dark clothes. A huge cross is burning causing the bonfire.

Jonhthan steps away from the fire and starts talking in lattin and then about them being sattionests. Jude, Dakota and Emily are shocked that they were all in a scame. Bradley and Tyler put up a huge projection screen and it shows the footag. The title comes up deleted scenes. The flim shows Lexi getting into charcter of being posseod. The only reason why they went to Tess and Jude's house to fake the footage to show Jude, Dakota and Emily in order for them to get here.

The others leave the fire in search for them and Lexi stands by the fire watching the flim. Jude sneaks up to Lexi with Dakota and Emily. Lexi turns around at them. She tells them in a deep voice we knew you would come back and quickly stabs a saw through Dakota's neck. The other sationists comes into the field scaring them. Johthan tells them how they met the Jenkins and that was where they used to live and they killed the people out there and now there here to kill them.

Johthan tells Lexi to finish him off and she starts buldegoing him. Emily tries to stop Lexi and Maddie starts chopping her body up with an axe. Johnthan then tells Jude not to move and the flim ends with Lexi coming up behind Jude and the screen cuts black and you can here him screaming.

Retrieved from "https://fanon.fandom.com/wiki/Exorcism?oldid=190253"
Community content is available under CC-BY-SA unless otherwise noted.