What happens when you cross over Mattel's fairy tale franchise with one of Disney Channel's original movies? You take one story, add a little romance, comedy, and thrills, and what do you get? A big crossover adventure!

When a mysterious rift in the storm appeared in Auradon, Mal, Evie, Carlos, and Jay were sent to the world of Ever After High where they meet...the powerful princesses of Ever After High! It all worked out for the best as they became fast friends. While the Villain Kids try to find a way back home while the students help them blend into the Ever After High life, the Auradon Kids, along with Freddie, Jordan, and Ally, were popped out of the rift too, where they found them...

...And things went REALLY crazy: Blondie Locks, Lonnie, and Jordan did a podcast together, C.A. Cupid and Jane both care about happiness and love and both have throwback retro styles while C.A. helps Jane with her crush on Carlos, and Audrey and Briar get along and have something in common: they're both the daughters of two different Sleeping Beauties.

From the world of Disney's Descendants:

From the world of Mattel's Ever After High: 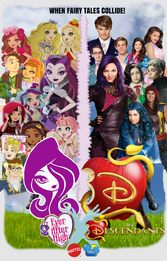 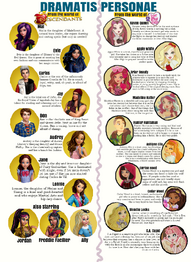 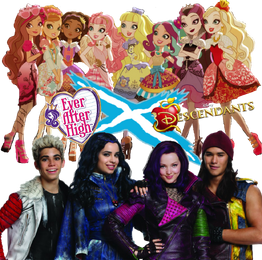 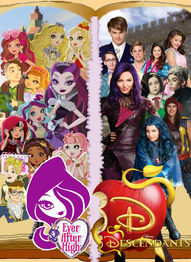 Poster/Cover
Add a photo to this gallery
Link
Retrieved from "https://fanon.fandom.com/wiki/Ever_After_High_X_Disney%27s_Descendants?oldid=283247"
Community content is available under CC-BY-SA unless otherwise noted.