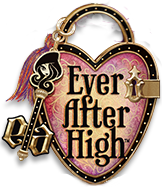 Ever After High is a 2017 live-action fantasy comedy film directed by TBA.

Ever After High is a boarding school located in the Fairy Tale World. It is attended by the teenage children of fairy tale characters, destined to follow in their parents' footsteps and keep their stories alive throughout the generations. According to Headmaster Milton Grimm, if the students don't follow their individual destinies, their stories will cease to exist and they will disappear forever. This problem is the core conflict of the series.

The main characters are Raven Queen, who does not want to be evil like her mother the Evil Queen and Apple White: daughter of Snow White who is destined to live "happily ever after". Raven would prefer to be free to create her own destiny while Apple, in order to protect her own destiny, believes that Raven should become the next Evil Queen. The students are generally divided between two groups: the "Royals" and "Rebels". The Royals are the students on Apple White's side who embrace their destinies and are content with their fates. The Rebels are the students on Raven Queen's side who prefer to create their own destinies.

Retrieved from "https://fanon.fandom.com/wiki/Ever_After_High_(Live-action_film)?oldid=283439"
Community content is available under CC-BY-SA unless otherwise noted.