Eliza Hope Bennett (born 17 March 1992) is an English actress and singer. Her most notable roles have been those of Meggie Folchart in the film Inkheart, Tora in the film Nanny McPhee, Susan in From Time to Time and playing Holly Manson in the West End musical Loserville. 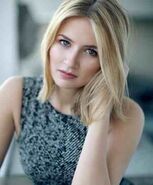