The Eds are off on the adventure to save their friends and the world from being destroyed.

Following of the ending of Big Picture Show, The Eds becomes friends with the Kids, until two boys from their fathers past arrived to their new house. The Eds fathers tell their wives that those two boys are their biological sons and Ed Edd n Eddy's half-brothers because they're friends with their mother who sadly passed away from childbirth. their wives are okay with them.

The Eds met their half-brothers for the first time and impressed of their survival skills in the woods, Lorcan shows them their map of their journey until the social workers arrived to seperate them. Cillian took on the first five while Lorcan took on the second five and won.

Eddy's impressed, Lorcan's happy that they've won. Cillian explain the Eds that they're on the run from the police and social workers around america for five years and Peach Creek is the final place to hide from. The Eds fathers decided to take them in, Cillian can stay with Eddy from mondays to fridays and on the weekends, he can go to Ed's while Lorcan stay at Edd's until they get new parents and they accept their idea. Eddy and Kevin invites Cillian to come to the candy store for some jawbreakers.

But then, at the candy store, the customers are turning black and white causing Kevin, Eddy and Cillian to run back until Kevin, Nazz, Sarah, Rolf, Jimmy and the Kankers are captured by a mysterious blimp, Lorcan reveals that they've moved from another town.

Edd didn't know that Cillian and Lorcan has powers and impressed that they used their powers to revive her which they complete.

At the central command, The Eds and the Twins discovers the blimp can travel dimensions and manage to travel to the human world to save their pals. Estelle walk to them and reveals that there's a portal in texas, She can monitor them from the command by ordering to following her path of redemption. Lorcan offers her a full pardon and exchange for her help which Estelle accepts the deal to order to reform. The Eds and the Twins are off onto their great adventure.

Cillian rides on the motorbike while Lorcan and the Eds are driving in the Eds retro van, Lorcan's very impressed of the van and discovers on  the local TV News channel, the journalist expresses his anger and gives the children the name "The Destructive Six." He reveals that Mayor Fitzhugh will conduct a secret meeting to decide a punishment for the kids. The next day while on the way to school, the children decide that they will apologize to Principal Prickley and explain their side of the story. Later, they are forbidden from recess and from seeing Prickley. They are given punishments from Miss Finster that she thought were 'appropriate'. The kids had to clean the floor with toothbrushes, peel onions and cut grass on the playground with scissors, wearing orange clothes, like prisoners.

Lorcan plans to help them escape until Cillian introduce himself to Mayor Fitzhugh as the military's son and ordering them to remove their punishment or he has prickly calling finster "Mama" and finster calling prickly "Daddy" posted all over the internet.

TJ and the Gang ran to the Retro Van while Cillian already posted it on the internet by using his phone and escaped. Gus founded out that Cillian and Lorcan are Wanted by the Police and the reward is $500,000 for them dead and a 1,000,000 for them alive so they can be arrested and be hand back over to the child protective services.

Lorcan discovers that they're almost to Texas. Cillian arrived to their place in Arlen to find the portal to the human world.

Eddy and TJ founded the portal and about to be sucked into it, Ed, Edd, Vince, Gretchen, Gus, Spinelli, Cillian and Lorcan grabbed them but got sucked into the portal.

At the WHITEHOUSE, President Alexander Awesome announce a meeting between both world's about to be crossover, Emily Shay (from Toilet Girl) arrived to the meeting after being late dued to her pit-stop and Professor Dimensions forgive her for being late, President Awesome also announces that the Cartoon World's crossing over by someone they know.

At night, The Eds, The Twins and the Recess Gang arrived to the human world to find the enemy. Edd can split up into teams, Team Smart and Team Awesome. Eddy accept the idea and get to go with Cillian, Vince, TJ, Spinelli and Ed while Edd go with Gretchen, Lorcan, Gus and Mikey but then Bobby Hill arrived and Join Lorcan's team to order to hide from his parents.

Eddy and Cillian watching the News of the youtuber celebrities, Markipliar, Ian Hecox and Anthony Padilla aka Smosh and the announces of the man named Doctor Black (the man who's responsible of the black blimp). Cillian shocked and found out that where's the blimp is. TJ, Vince, Spinelli and Ed are shocked and able to find the blimp at the tower.

Edd and Lorcan discovers that Bobby reveals that his Dad had arranged for him to work at Strickland Propane which he doesn't want to be a tank-wipe and had a fallen out.

Team Awesome are running to the tower as he knows where the blimp is.  At the central command, Estelle's feeling unwell and decided to go to the toilet.

Cillian and Lorcan reveals to Eddy that they've lied about the social workers hunting them down and Lorcan said they're a good actors. Edd very impressed.

Cartoon Character's Cameo at the ending 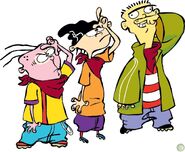 Hank Peggy and Bobby Hill
Add a photo to this gallery
Retrieved from "https://fanon.fandom.com/wiki/Ed_Edd_n_Eddy%27s_Presents:_Ed_Edd_n_Eddy:_The_Movie?oldid=312295"
Community content is available under CC-BY-SA unless otherwise noted.