Doctor Who is a 2017 live-action science fiction film based the british television series Doctor Who. It's tagline is "The Doctor is in".

The Doctor and his companions battle a group of aliens 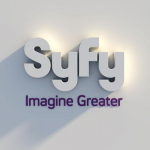