Divinity (also called the Divine Might, or the Power of the Gods) is a special power to which True Ancestors are capable of performing. Each True Ancestor's Divinity differs from each other, as the incarnated Aedra is different. It's one of the most powerful powers on Nirn and beyond. What makes divinity unique, is that only True Ancestors can truly gain access to this power, and only they possess it on Earth as incarnated Aedric spirits. 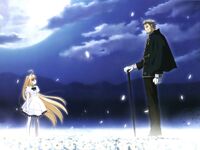 Alucian's main Divinity is the capable of form of telepathy known as Divine Telepathy. Being immensely more powerful then any known telepathy capabilities, Alucian is able to connect to any and all minds of man or beast, and even nature itself in the universe. He is able to project himself into other realities, and universes, and communicate to anyone in that universe and this includes the Deadric prines and the Nine Divines themselves. He became known as the True Ancestor of Telepathy or the True God of Telepathy due to this.

A visual power compared to Divine Telepathy. Using his eyes, Alucian is able to see everything in his field of vision, enabling him to see even the smallest thing in the universe such as the electrical bonds between atoms, and the molecules in a entity, or the cell of a man. He can see pass even the genjutsus of the Sharingan, Mangekyō Sharingan and the Rinnegan, and any and all illusion-based magic and spells. He can see through solid matter, making him see through walls at will.

Retrieved from "https://fanon.fandom.com/wiki/Divinity?oldid=405569"
Community content is available under CC-BY-SA unless otherwise noted.