Fanon Wiki
Register
Don't have an account?
Sign In
Advertisement
in: Pages owned by users, Articles by Drew Gars, Films directed by Joseph Kosinski,
and 74 more

Digimon: The Duel of BlackWarGreymon

After Ken's defeat, he repents for his evil deeds and joins the Digi-Destined as they fight two evil Digimon named Arukenimon and Mummymon. Arukenimon has a unique power to turn the Control Spires into super-strong, artificial Digimon under her control, but then she creates a renegade Control Spire Digimon who refuses to follow Arukenimon's orders and starts wreaking havoc on the Digital World. To fight this new threat, the gang learns of DNA Digivolution, enabling their Digimon to fuse with each other in pairs for more power. 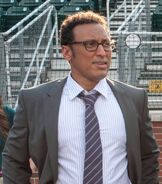