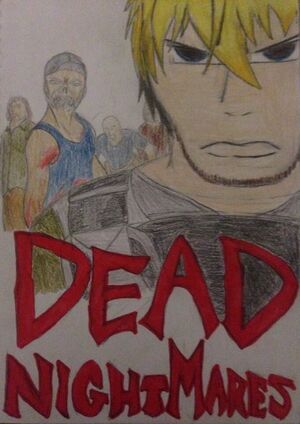 Dead Nightmares is an upcoming survival horror drama fanfiction film created and developed by Ghost Hunter 85. It is also the first installment in the series.

The characters are drawed by Ghost Hunter 85.

Takuto and his team arrive at Sunshine City by helicopter and are tasked to rescue survivors. While make their way inside, Takuto and his team are attacked by zombies, all except Takuto were killed by zombies and he manages to escape. With Takuto left being the only surviving member of the team, he continues searching through the mall and is suddenly is knocked out. Takuto wakes up in a security room and greeted by Nicholas Wong and four other survivors.

They explain that there is no way out of the mall and that they've tried, but Takuto assures them that he will get them out safely.

military members, Kenji Nakoto, David Hei and Mikasa Sakamoto reunite with Takuto after being separated from the zombie attack and join Takuto to find a way out of the mall, until they notice a random survivor in the distance. They follow the survivor to learn where he's going. After following him they discover he is a serial killer when he tries to kill a woman who he tied up, Takuto manages to stop him but ends up killing him in the process. After that, Kenji betrays Takuto, Mikasa and David, revealing he is a double agent working for an organisation that started to outbreak. Takuto wounds Kenji but manages to escape and Mikasa is bitten by a zombie. Takuto and David take her back to the security room, while Takuto and David search for Nakoto. While searching, they find a survivor named Yumi Yamahari who reveals that she is scientist working for the organisation OMINUS along with Kenji, but has been trying to work on a cure. Yumi brings the two to her hideout and Yumi finishes making a cure, but Kenji finds them and kills David by shooting him in the head, then he leaves with the cure.

Back at the security room, Nicholas and the others manage to get in contact with the military, but they ignore their distress call and leave them to die than Mikasa turns into a zombie and kills Nicholas and the rest of the remaining survivors. Takuto and Yumi return to the security room, only to find Nicholas, Khai, Ramsey and Rhee eaten alive by a zombified Mikasa, Takuto mercifully kills her by snapping her neck. After that, they find Kenji on the security camera and go after him. They than make it outside, but only to captured by Kenji. He brings Takuto and Yumi up to the rooftop for execution, but Takuto manages to break free of binds and he and Keni prepare for the final battle. Kenji manages to get the upper hand, but Yumi distracts Kenji which gives Takuto the advantage and kicks Nakoto off the roof.

In the end, Takuto and Yumi escape the mall with cure and are rescued by military operatives. Later in Tokyo and unknown man gets off the phone with Hanzo Rutganda, who is revealed to be the leader of OMINUS.