Leader of the X-Men

Cyclops is a playable character in the crossover fighting video game, Marvel vs. Capcom: Armageddon. His return to this game was officially announced in the E3 trailer on August 16, 2019. Cyclops is classified as Marvel fighter #4.

Voice actor Scott Porter (who also serves as the voice actor for Winter Soldier) provides the role for Cyclops in this fighting game.

This character is available at the start. 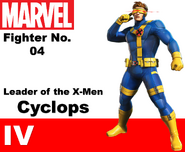