Cursed Cases is a supernatural horror comedy television series. The series follows 5 friends who hunt supernatural creatures, they work together to defeat every creature they come across.

It starts off with the seven friends searching for Slither. Slither then appears and they shoot at him but miss. Slither then attacks the friends and Brian (Thomas Brodie-Sangster) shoots at him, making him fall down. Ben (Cody Christian) is then stabbed in his heart with Slither's claws and Audrey (Lyndsy Fonseca) is stabbed in her stomach with Slither's horns. Slither says "I'll be back" and disappears.

It then skips to Adrian (Liam Aiken) visiting Audrey's grave and says "I'm sorry". Audrey then appears and snaps his neck. Adrian then wakes up and Jed (Michael Cera) asks if he's alright, and Adrian says he had a nightmare about Audrey. Jed says he has nightmares of Ben and is fine with talking to him about the nightmares. Adrian then gets a call from Brian and answers it. Brian explains to him that they're going to kill Slither and Adrian tells him that they will be there soon.

Claire (Emma Watson) explains to the group that she has been keeping track on where there have been reports that they saw a demon in California. Julia (Danielle Panabaker) asks how she knows it's Slither. Claire explains that Slither has only appeared in California. Brian then tells Adrian and Jed that they have to end this once and for all, but they need their help and Adrian and Jed both agree.

They then plan to capture him by using the Devil's trap, if they can lure him. At night, they summon Slither and he attacks them. Slither then notices the Devil's trap and disappears. Adrian then yells at them for failing and Jed calms him down. Brian says that he is not the same scared, funny Adrian that he use to be. Adrian says he changed and leaves with Jed. Slither then appears and attacks them, hurting Jed by scratching his chest.

Jed is in the hospital and the five friends wait patiently for news about Jed. The doctor then tells them that Jed might not live any longer and says that they will give news if he feels better. Adrian then tells his friends that they need to make a deal with Slither.

They summon Slither and tell him that they want to make a deal with him, if he saves Jed's life then they will stop hunting him and he accepts. Slither then appears in Jed's room and touches Jed. Slither then appears in the boiler room and tells them that it's done. In the morning, the doctor tells them that Jed will be fine and they then visit Jed in his room. Jed then asks what they did and Adrian says that they made a deal with Slither. Jed thanks them and Adrian says that he was scared the whole time, they all laugh and leave the hospital together.

It start of with the five friends Brian (Thomas Brodie-Sangster), Julia (Danielle Panabaker), Claire (Emma Watson), Adrian (Liam Aiken) and Jed (Michael Cera) in their van, when it is show they are actually in Norway. A snow strom ensues, and the five seeks refugee in an near hotel in the mountains, the Draspman. There, they meet the Hotel managers, Anders (Trond Espen Seim) and Malin (Ingrid Bolso Berdal), who are clearly mad at each other for personal problems.

Brian asks if they can be for a night there since they don't have a place to go and the van was dead. Anders allows it and each one of the gang (excpet for Adrian and Jed) receives an own room. When they are together in the main room of the Hotel, Claire says she heard about the legends of a monster leaving in the region, and that he killed ten travellers in 1958. Brian does not believe it, but as they will start to argue, an family consisting of Gwen (Jena Malone), Kyle (Ansel Elgort) and Katie (Kristianna Loken) arrives scared, saying that a monster looking like a bull was chasing them.

The gang then starts to investigate in the forest and in the lake, but they discover the monster is real when he injures Claire, so now they need to think for themselves without hte brain of the team. Jed and Adrian stumbles upon the monster again, but they discover he becomes afraid when he hears an mysterious sond. Gwen, Kyle and Katia agrees to aid the gang as they feel is the right thing to be done. The monster, whom they discover is a Minotaur, chases them thorugh the hotel, but it only kills Anders. Brian runs to save Claire from her healing room and manages to knock the monster off. Running scared, Jed and Adrian unintentionally lures the Minotaur to an near damn and drowns it, where he dies. Julia spots the person giving the strange sounds on the apparell and chases it. Brian and Julia manages to take the person, whom they discover is Malin.

Malin reveals she awoke the minotaur via an ritual to kill Anders, whom abused her. She is sent to jail for murdering and the gang departs after the family buys Hotel Draspman, promissing it will be a place free of evil and good for families. The gang departs on their van where Claire awakes and asks "What happened. did I miss something?", then all friends (except for Claire) laughs.

3. Vampires of the Night

It starts off with a woman running in the woods. The woman then hears walking and hides behind a tree. She then stops hearing footsteps and walks out from behind the tree. Blood drops on her and she screams.

It then skips to Brian (Thomas Brodie-Sangster), Adrian (Liam Aiken), Julia (Danielle Panabaker), Claire (Emma Watson) and Jed (Michael Cera) are driving around Australia. Claire says that their have been reports that a wild animal has been killing human beings. Adrian asks what it could be and Claire tells him that it's vampires. She tells them that the victims had bite marks on their necks. Adrian then says that he wishes he could be a vampire and Claire asks why, so he could trick a girl into having sex with him and they all laugh.

They then arrive at a hotel and check in. Jed asks why they have to hunt vampires and not let vampire hunters do it. Claire says it's important to kill them since it will be their first time. Jed says vampire hunters know how to kill them and Claire tells him "all we have to do is stab them in the heart. Simple".

At night, they go to Applebee's and meet Zeke (Xavier Samuel), Tom (James Mackay) and Mia (Rachael Taylor). Zeke then notices a group of vampires and spots Ella (Phoebe Tonkin). He introduces himself and asks her if she would like to hang out sometime. She says yes and they both smile. Frank (Sean Bean) and Seth (Alex Russell) tell him to leave her alone and Ella and Sophie (Freya Tingley) try to tell them to stop but Zeke and Seth get into a fight. Brian then punches Seth and tells him to leave him alone. The vampires then leave and Zeke thanks Brian.

The 8 of them are then attacked by a vampire and Zeke decapitates the vampire. Zeke, Tom and Mia explains their vampires and explains how to kill them and their weaknesses. Mia explains that they have been searching for them ever since and that they're hard to catch. They are then captured by vampires and Frank tells them to take them away.

They wake up and Frank tells them that they're going to kill them one by one. Seth then bites into Tom's neck, killing him. Mia says to Frank that she will kill him and he starts laughing. They then leave the room leaving the 7 of them by their selves. Ella and Sophie then come in and let them go. Ella kisses Zeke and tells him to come back to her.

They then start to plan how to stop the vampires. At night, they then go back to the vampires' hideout. Frank then tells his vampires to attack and they get attack them. They manage to kill all the vampires and Frank tells Seth to attack but Ella and Sophie tell them to stop and Ella says "I know that you both kill humans but you can change. Be good for once and I can help you not to kill humans." Frank tells Seth to stop but Seth grabs Zeke. Seth is about to kill Zeke but Ella then beheads him with a machete. The five friends then leave and say goodbye to Ella, Frank, Zeke, Mia and Sophie. Adrian and Jed then see Audrey (Lyndsy Fonseca) and Ben (Cody Christian) and they disappear. The five friends then get in the car and drive away. 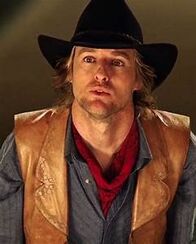 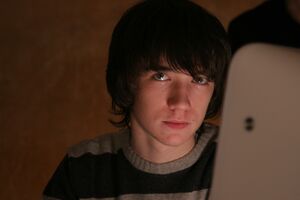 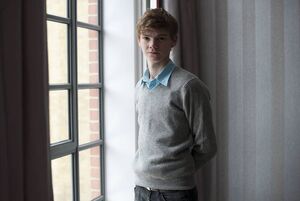 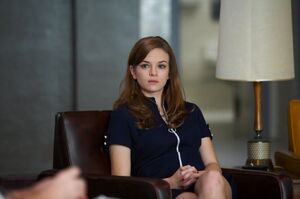 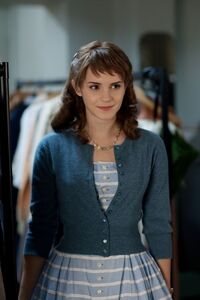 Claire
Add a photo to this gallery
Retrieved from "https://fanon.fandom.com/wiki/Cursed_Cases?oldid=215481"
Community content is available under CC-BY-SA unless otherwise noted.