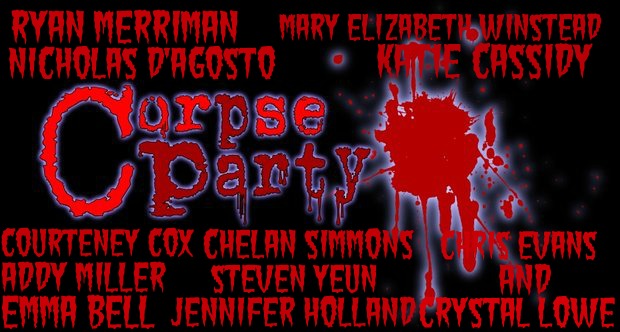 Corpse Party is a Horror Slasher Thriller 2018 Film and is the remake of the 2011 Japanese psp game on the same title.

Shelby Peters - After remembering her Missing Mother, she hears voice from girl's bathroom calling her. When she came an ghost grabs her. As she screams Naomi came on the bathroom finding her being hung by neck as Naomi cry Shelby was still alive and calls Naomi as Naomi tries to remove the rope on her neck it became tightly and Naomi goes outside to search some items to save Shelby and spots a bucket with blood, worms, and human parts as Naomi says it was disgusting she returns to the bathroom finding Shelby without breathe and was killed.

Retrieved from "https://fanon.fandom.com/wiki/Corpse_Party?oldid=252609"
Community content is available under CC-BY-SA unless otherwise noted.