Christmas Day is an 2020 romantic-comedy film directed by John M. Chu. It starts with an ensemble cast.

Anna is a columnist for a Cosmopolitan-esque magazine called Clique while Josh is a wedding planner who takes full custody of his niece Beth and owns a cat named William. Anna and Josh meet on a play Emilio wrote years ago and find out they are both pessimistic a-holes who hate the concept of romance. Years later on Christmas Day, Anna accidentally leaves her diary after her her boss Bill demands her to hurry up while having breakfast on a cafe shop and Josh finds it, and for the last few minutes Josh has been trying to find Anna to return her diary along with Beth and William.

Stewart is a newly divorced golfer who has defeated golfers like Tiger Woods while Macy is a pastry shop owner whose business is going bankrupt after an embarrassing moment recorded in Live TV. Meanwhile, Kyle is a NASCAR racer who is engaed to Macy's employee Tamera. Macy is invited at Kyle and Tamera's engagement party and meets Stewart and they both find themselves locked and trapped on the gazebo located in the garden.

Harry is an Assistant Regional Manager to a Dunder Muffin-esque paper company in New Jersey living with his girlfriend Stacy, a fashion designer. Stacy waits for the day Harry proposes to her.

Nora is a cafe barista who has a crush on Emilio, a playwright who just created a play that Tennessee Williams would appreciate that premieres on Christmas Day. She and her best friend Stacy are preparing for their best friend's wedding.

Stacy's stepbrother Daniel is a widowed-yet-hopeless romantic Indian-American living in Salt Lake City, while Sandra is a British-Chinese model who wants to escape the media that has surrounded her. They both meet on a Kyle and Tamera's engagement party, and both share an interest of the Statue of Liberty.

Normadi and Caprice are best friends since college and both own a restaurant inside the Grand Central Terminal. They encounter Luke and Austin, two handsome billionaires who are obsessed with finding the right person.

Louis is an engineer and alcoholic and his daughter, Laurie is a college student with aspirations to be a jazz pianist. Louis has a crush on Nora, who always puts post-it notes everytime he orders a coffee flavor he likes. 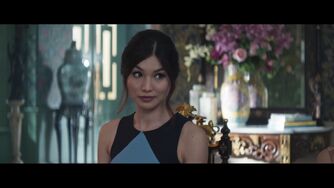 Sandra
Add a photo to this gallery
Retrieved from "https://fanon.fandom.com/wiki/Christmas_Day_(2020_film)?oldid=463468"
Community content is available under CC-BY-SA unless otherwise noted.