The Celestials are a extraterrestrial alien cosmic beings whose origins varies depending on what legend or the Celestial in question. However, most say they all originated from Hyperspace, and are the de-factor creators of Hyperspace itself.

Shattering of the First Firmament

Dawn of the Celestials

Battle for the Celestial Forge

Death of the One Above All

Fall of the Celestials

Destruction of the Celestials

The "Armor" acts like the skin of the Celestials like the skin of humans. The Armor acts has hard metallic tissue of organic robotic organisms to a degree. However, unlike Human skin which is soft, Celestial skin "armor" is a very very hard substance of unknown origin, and can withstand blasts even from a starship hitting the at the speed of light.

To humans, they see comprehend it as "skin". But to the Celestials, it's their muscles. Under the armor skin, is a another hard substance taking form as human skin when it's actually muscle. It is unknown how they become to look similar to humans in terms of physiology under their armored skin, but it is said they created the human race after their appearance, but it is unknown if this is true.

And under muscle, is a structure of "bone-like" structure encased in a energy that surrounds them that acts as a second layer of muscle (called the Inner Muscle), which protects the skeleton and the Celestial brain from harm. This energy makes the Celestial a incorporeal beings, making even most energy blast doing nothing but damaging the Inner Muscle to reveal the Energy coat.

Supernatural Physical Condition : Celestials with or without their armor, possess immense physical condition beyond of almost any being. They capable of lifting the more then 500,000 tons with a single hand, and due to their energy-coat under their Outer Muscle, and their bones being immensely hard, the can endure immense physical stress, and their durability makes them just as hard and sturdy.

Magic Embodiment: The Celestials are the very primordial embodiments of Magic itself, having part of their existence entirely of Magic Energy, alongside unknown, impossibly comprehensible energy. Even with with no magic energy, Celestials will still be at maximum power if tempted to.

Immortality: Celestials are immortal cosmic beings, and is actually almost impossible to truly kill or even harm them. A single Celestial has the capacity to withstand planetary shattering impacts with ease, and withstand the 3 attacks of Gods and be unfazed as if nothing even struck the Celestial, this it not the feat of power, but the feat of endurance. This suggest that the Celestials are much more powerful then

Flight: Celestials are shown to be able to fly as if there were no gravity.

12-Level Intelligence: Celestials in intellect, are the supremely intellectual capabilities, able to learn many highly hard concepts with effortless ease, and can perform thought processing at a accelerated rate beyond any race. 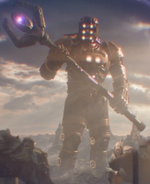 Teon
Add a photo to this gallery

Retrieved from "https://fanon.fandom.com/wiki/Celestial_(Earth-8000)?oldid=399428"
Community content is available under CC-BY-SA unless otherwise noted.