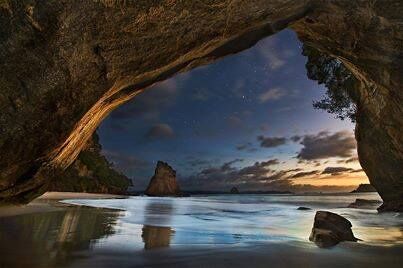 The Fright Hound barks at them and then runs away. Carter, Chad, Katherine, Cordeila, Jason, Micheal and Seth relutcantly keep running forword and find the tunnel closed. Stan, Drew, Troutman and Cameron come in wondering where The Circle is at. Cody tells them that they left already and Cody tells them the way they got in. The Angel of Death takes back her real name which is Aria. Aria, Breannon, Shelby and Dalton don't know where there at and walk into the woods and they eventully find a beach. They follow a light inside a cave. Troutman, Drew, Stan and Cameron find the tunnel and that it's sealed shut. Drew calls wind to open the tunnel and the wind hurrels the tunnel lid away. Carter, Katherine, Chad, Micheal, Seth Cordeila and Jason run out of the tunnel. Carter wants to know where Breannon and The Angel of Death are at. Drew tells him that they haven't seen him.

Carter worries something happend to them. The light leads them to a a huge mirror and they look through the mirror and it turns into New York. The mirror has Catoptromancy which lets you see distant people or places. Breannon thinks that something wants them there and they decide that they need to go out there. They walk out of the cave where they met a man named Mick who is a Aerokinesis which means control the weather and he brings him, Aria, Shelby and Dalton to his mansion in New York..

Katherine knows what mansion there in and it's Vanilla and Cream a gay couple and the kings of New York. The mansion is in the middle of Centrel Park. Breannon tells them that they suddenly appered in a cave here after Aria made them human again. Vanilla and Cream are both Resurgents. Vanilla has Shamnisim and Cream is Pyrotechnis. Vanilla and Cream have Carter come into there office in private and tell him that they had his eye to eye vison of what has happend and they show them the Catoptromancy mirror that shows Carter at Royal Academy and what he's been through.

Troutman tells The Circle that McKenna is the leader of the Orbiters that's in Pennsylvania and that he could help them. McKenna comes to the mansion and tells them that his band of Orbiters could help them in the Witch Battle but he thinks New York is going to be taken over by Heveraux a powerful witch with the powers of Electrokenisis, Atomkenis and Aerokiniesis whose an enemey of Vanilla, Cream and queen Sophie. Cream and Vanilla tell them that Heveraux has been trying to take them down.

Carter wants to know what Queen Sophie says about all this. Cream offers to take him and Breannon and Venus want to go. The next day they just want to hang out in the park before they go. They see Heveraux protesting agansit Cream and Vanilla with signs and yelling at people in the park. He smiles at them and walks over to Cream and starts arguing with him. Heveraux makes fun of how Cream is gay. Carter, Venus and Breannon defend him and Heveraux starts making fun of Carter and Carter suddenly shoots a blast of energy that sends him flying away knocking him out.

Carter is shocked and they run out of there. They ride in a private subway to the Queens and walk to Queen Sophie's mansion. They warn Sophie about Heveraux and what just happened. Sophie studies Carter with her mind and see's Electrokenis in him even though Christopher deflected his powers. Sophie explains to him that his powers came to him instead of from the Horned God and Moon goddess. Carter tells Queen Sophie that the Horned God and Moon goddess are bad and tells her what they did.

When they get back to Vanilla and Cream's mansion they tell them what happened. Breannon and Carter go upstairs for quiet time and have sex for the first time. Carter can't sleep and walks to the Catoptromancy mirror and see's Heveraux in Manhattan causing a huge storm with his powers and he starts striking stuff. Carter starts yelling for everybody to come down here. The Catoptromancy mirror goes to the past and shows Heveraux killing Sophie's guards and starts destroying her mansion. There's a huge knock on the door and Ray answers it and it's Sophie who escaped Heveraux.

Sophie tells them that Heveraux tried to kill her and that he has the government blocking the city and wont let no one leave. Sophie tells them that they need to get out of here before Heveraux decides to kill them. Sophie calls her sister Deveraux who is the queen of Pennsylvania. She sends a plane over with her husband Sean the king. Cream wants to go out and kill him but Vanilla stops him. The plane arrives and The Circle gets in and they fly to Deveraux's mansion. Sophie tells Deveraux and Sean what's been going on and they tell them that they can stay here.

Mickey gets a text message and leaves the mansion sneaking out and drives in one of Deveraux's cars to a park where he reads the text message again. Come to Hall Park at Midnight of Carter gets hurt-Witch Hunters. Michael here's a twig snap outside and goes out there and two men grab him and take him away. The Circle realizes that Mickey is missing and they try to text and call him but he want pick up.

Sean and Deveraux doesn't have no witch hunters here so they don't know who would kidnap him. Sean talks to Carter in private wondering what his powers are. Carter gets the feeling not to trust him and tells him that he doesn't have any no more and leaves. In a huge white room the two men drag Mickey in there and tie him up. When Mickey wakes up McKenna is standing there with a gun. McKenna shoots Mickey in the head killing him.

McKenna calls Troutman and tells him to come to his compound he has to show him and Carter something. Troutman tells Carter and asks Sean if they could use one of the cars and Sean tells them to knock themselves out. Carter tells Breannon where he's going before he leaves. Troutman and Carter drive to the compound and they park in the forest and go inside the Orbiter and Emapther compound. McKenna tells Troutman that he's going to show them one at a time what this is and has Carter go with him and Troutman stays in the lobby reading a magazine.

Carter goes into the huge white room with McKenna and finds Mickey's dead body. McKenna then locks the door. Troutman wonders what's going and McKenna yells at him and beats him in front of everybody. McKenna comes back later with the two guys and they take Mickey's dead body. McKenna tells Carter that he needs his extraordinary powers and knows about him developing powers. Carter doesn't know what McKenna is talking about and McKenna tells him that Carter has every single power there is running through his veins he just doesn't have them all yet. They come slowly one at a time.

McKenna thinks by killing him that he will become the next Scrying and he leaves. Troutman knocks his dad out with a Trophy and takes his keys and breaks Carter out of the room. They break out of the compound and run past the guards and they start to chase them through the forest but they lose them. They see McKenna's guards put Mickey's body in a coffin and on to a jet. They run away and Troutman and Carter get on that jet. Troutman knows how to fly jets and Carter gets in the backseat with Mickey and opens his coffin. Troutman fly's the jet and leaves the compound.

Carter falls asleep on Michael's chest. Breannon, Blake, Will and Ray are worried that something may have happened to Carter and Troutman but Sean tells them that he thinks there spending the night over there and he walks away with a sick smile. In the morning Carter wakes up still in the Jet and he see's a storm up ahead and tall skyscrapers. Carter wants to know why Troutman flew him back to New York City. They start to fly low and Troutman tells him not to worry about anything.

They land where the government has a barricade around Manhattan. When they leave the jet Troutman finds a semi with a trailer on the back to put the coffin with wheels on and Mickey. Carter gets in the back with Mickey and Troutman knocks them both off on purpose. When Carter manages to stand up again he see's the truck still sitting there. He see's Troutman drive a little and stop but then he speeds away. Carter watches it until it turns into a blur image and mutters the words "Troutman betrayed me."

Retrieved from "https://fanon.fandom.com/wiki/Catoptromancy?oldid=127386"
Community content is available under CC-BY-SA unless otherwise noted.