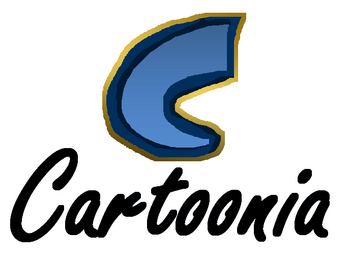 Cartoonia is an American digital cable and satelite television network that airs animated series for pre-teens and teens 24 hours a day, 7 days a week, and 52 weeks a year. The channel was first broadcast on January 1, 2010 @ 12:00pm EST with a rerun of the first episode of Total Drama Island. The channel is also owned by Dudertainment Networks, Inc.

As of February 2015, Cartoonia is available to approximately 45.2 million pay television households (39.1% of households with television) in the United States.

A 24 hour broadcasting channel, Cartoonia began broadcasting on January 1, 2010 with a rerun of the two-part Total Drama episode, "Not So Happy Campers" combined into one half hour episode, with future reruns of the episodes being seperate, just like on the Cartoon Network airings. Since it's launch, Cartoonia has aired as a commercial-free all-animation network, with animated shorts, bumpers, and promos filling in the commercial space.

In 2011, as an airing advantage, Cartoonia started airing shows rated TV-PG-DSLV and TV-14 to attract older teen audiences while keeping their pre-teen audiences. Shows such as Family Guy (Seasons 1-4 only), American Dad (Seasons 1-2 only), Bob's Burgers, and King of the Hill joined the network's line-up, airing from 9:00pm - 11:00pm at night as a part of a newly introduced programming block called "LateNite Party".

This is a list of programming broadcast on the network.

The network's main logo. Used since it launch on New Year's Day, 2010.

The secondary logo. Seen on the network's website and used for some bumpers and promos.

A Cartoonia screen bug used during programming.
Add a photo to this gallery

"Graffiti".
Add a photo to this gallery

The network's split-screen credits. Used during the credits of a program, and occasionally not used during holidays.
Add a photo to this gallery
Retrieved from "https://fanon.fandom.com/wiki/Cartoonia?oldid=240514"
Community content is available under CC-BY-SA unless otherwise noted.