Carrie: Terminator 3-D: Battle Across Time is a 2022 science fiction film and is the attraction is a mini-sequel to the 2013 remake film "Carrie" and the 2021 film "Carrie: Terminator: Judgement Day". Directed by Kimberly Pierce, produced by James Cameron and distributed by Metro-Goldwyn-Mayer,Screen Gems, and Paramount Pictures. This film will feature Chloë Grace Moretz, Portia Doubleday, Gabriella Wilde, Ansel Elgort, Alex Russell, and Abby Ryder Fortson. The franchise of Carrie and Terminator for crossover between.

Guests are ushered from the pre-show auditorium into a large theater that seats 700, where they view a demonstration of Cyberdyne's newest creation, robotic soldiers called T-70 Terminators. Once guests are seated, they put on their "safety visors" to watch a demonstration of the Terminators in action. However, Carrie White (Chloë Grace Moretz), Sue Snell (Gabriella Wilde), & Tommy Ross (Ansel Elgort), & Little Carrie Snell (Abby Ryder Fortson) arrive and disrupt the proceedings, followed by Billy Nolan/T-1000 (Alex Russell) Terminator from the future (its appearance as the helicopter pilot), whom they engage with automatic-weapons. Emily Duncan tries to stop Billy, but the attempt fails as she is killed by Billy. A second Terminator, Chris Hargensen/T-800 (Portia Doubleday), bursts through the movie screen "time portal" on his signature Harley-Davidson motorcycle to rescue Little Carrie. She takes Little Carrie back through the portal to 2050, into the future war between humans and machines. Little Carrie and Chris make their way across the war-ravaged landscape as they head towards Skynet. Along the way, they are chased by the Billy (who followed them through the time portal), a Flying Hunter-Killer, four Mini Hunter-Killers, and a Terminator endoskeleton.

The duo successfully penetrate and descend with the audience into the Skynet core, where they battle the "T-1000000", a giant liquid-metal spider that is similar to a very large Billy. After accidentally worsening their situation, Chris finally sends Little Carrie back to the present while he stays behind to blow up Skynet and the T-1000000. During the destruction of T-1000000, water is squirted from the ceiling onto the riders. The show ends with the ground-shaking destruction of Skynet, leaving Carrie, Sue, Tommy, & Little Carrie alone in the present time once again. During the explosion, the seats of the auditorium lurch with a sudden drop, giving guests a final scare and ending the show with Carrie, Sue, & Tommy finishing the attraction by narrating that she feels that she owes her life to Chris for saving Little Carrie's life. During this narration, a Terminator endoskeleton's face fills the screen, which morphs into Chris's face before the film fades to black, during which Little Carrie, Carrie, Sue, & Tommy mysteriously disappear. 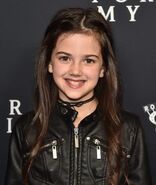 The following film is rated "T" for excessive violence and strong language throughout....