Carrie: Spider-Woman is a 2022 American superhero film the 2013 remake film "Carrie". Into the "Carrie" Novel as well as "Spider-Woman" American comic books. Spider-Woman by Jason Latour & Robbi Rodriguez and Carrie by Stephen King as to the 2021 crossover film. The directed by Kimberly Pierce, produced by David Heyman and distributed by, Metro-Goldwyn-Mayer, Screen Gems and Marvel Comics.

Carrie White (Chloë Grace Moretz) is shy to figure out who she is and how she got to be the person she is today. Carrie is also finding her way with her Ewen High School, David Carmody (Jamie Blackley), Sue Snell (Gabriella Wilde), & Tommy Ross (Ansel Elgort). They struggle with love, friends, & secrets. Carrie had spider powers instead. EcLcorp and the lab of Dr. Kat EcLean (Lucy Hale). Carrie has to become Spider-Woman. As Spider-Woman with Kat's alter-ego, Goblin Queen.

In 1995, to Margaret Brigham White (Julianne Moore) & the late Ralph White, Ralph were killed in a grisly construction accident, she never letting her into the outside world, believing everything to be sinful… even going as far as locking in the 'Prayer Closet', as punishment, for just trying to be normal and trying to fit in with the outside world…

At the White's Residence that day, Margaret & Ralph are in the room, Margaret's pregnant, are coming.

Margaret screamed as loud as she could, collapsing atop her hard bed, she looked frantically across her destroyed bedroom, searching for her vengeful protector.

Margaret winced in pain as the old house creaked and echoed through the halls of her bloodstained home.

Margaret: Mother Mary, protect me, guide me in my hour of DEATH...AHH!

Margaret felt pain that she had never known before, she once again unleashed a bloodcurdling scream for help from her lord all mighty, as sweat once again streamed down her checks towards the top of her sacred rosary.

Margaret once again exclaimed to the heavens as she rolled around hopelessly on her bed. But suddenly, the pain had subsided, she felt a feeling of gratitude come over her, as she believed she had been lifted from her curse.

Margaret was stop in her sentence as she began feeling, the body of a small creature, resting in between her legs, her heart began to beat fiercely as she realized what it was.

Margaret mumbled to herself as she pulled back the bottom of her newly ruined nightgown to travel the face of just an innocent young girl, drenched in blood, and unable to handle the beaming lights of the world with her young, weakly eyes.

Margaret hissed to herself quickly retrieving her pear of razor sharp, sowing scissors, resting on the bed side table across from her.

Margaret continued to herself, finally looking into the eyes of her new young daughter.

Soon released her iron like grip from the blades of her unhinged weaponry and dropped it onto the bed just beside the small infant that rested at her thighs. And with a faint smile across Margaret's face, she quickly wrapped the young girl into her cold grasp, gently hashing her young daughter as she slowly reached in kissing her small check, calming the newly born baby. And as the cries of the child could be heard through the dark halls of the White family home that night, Margret looked yet again to the havens, thanking the lord for the gift of life, that he had bestowed upon her, on this day.

A spider bite's white & pink into the White's Residence. 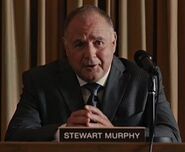 It will be distributed by Marvel Comics with Metro-Goldwyn-Mayer and Screen Gems.