After an incident on a science trip, Carrie White experiences some dangerous changes in herself, every time she gets angry... 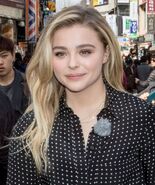