A group Five of Ewen High School Students acquire superpowers after they discover an Alien Space Ship, Zordon and Alpha 5. They soon learn about its origin and use their abilities for good. Five of Superhero call the Power Rangers.

65 Millions of years ago, the Cenozoic Period was attacked, the Power Rangers are tasked with protecting life on Earth and the Zeo Crystal, volcano, mountain.

Spaceship got down, bomb exploded.

Zordon was climbing & fasting, he saw her left hand is The Yellow Ranger. She gave him, Yellow Ranger was Power Down to an alien woman, she was naked.

Zordon: *speaking alien language* Alpha, I'm the last one left. We must stop her. Send the meteor to my coordinates.

Red Ranger was Power Down to an alien Zordon, he was naked.

Zordon saw her, The Green Ranger was himself Rita Repulsa (Elizabeth Banks), her plan was to create Goldar, Rita's wand, Rita betrays them and plans to dominate the universe, Zordon survives Rita's attack and hides five of the Power Coins.

Rita: *speaking alien language* With the Zeo Crystal, we could have rule the Universe together.

Zordon: *speaking alien language* That was never going to happen.

Rita: *speaking alien language* Then you will die, Zordon.

Zordon: *speaking alien language* We will die together, Rita.

Rita saw meteor rock was coming, Zordon got down, and a bomb exploded.

Zordon was asleep, the crystal, Alpha 5 was able to save his essence and imprint it onto their ship.

Mr. Ulmann saw announces that one of student.

The one of Student David Carmody will be joining them, but the desk is empty save for a green jacket.

The all the locker hallway door assembly.

The one of locker hallway door assembly was broken, smoking, & destroyed. 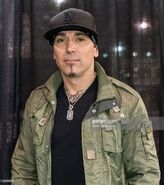