In 1974, Young Daniel Mean, he meets the Wizard, The Seven Deadly Sins & the Eye of Sin. In 2013, the town of Chamberlain, Maine, one of them finds and The Wizard with Carrie White, she transforming Lady Shazam! Carrie with David, Sue, Tommy, George & Erika. Carrie's superpowers. Carrie and the others is Shazam Family. Carrie stop to Daniel.

The storm, snow, & the wood, the car was street.

The young boy Daniel Mean, he was riding in a car with his father Harry Mean & brother John. Young Daniel was the glasses, his hands sounded Magic 8 Ball, he saw Noticed: DON'T COUNT ON IT. Harry the mirror Daniel.

Harry: Daniel… I said no toys at Grandfather's.

Young Daniel: But it's Christmas.

Harry: Daniel, you can't go crying to other people all the time. A man needs to know when to stand up for himself.

Young John: Dear Magic-Isn't-Real Ball, will Daniel ever be a man?

Young Daniel: You broke it.

Young Daniel saw the empty. The riding & chairs are empty.

Young Daniel: Someone help me!

Young Daniel got out of the car, he was walking, he saw the worm was captured & kept in a terrarium.

he saw walking the cave.

He into Rock of Eternity, he saw all 7 of chairs, The old man, he got up, The old man's red & yellow costume (Samuel L. Jackson), Wizard's symbol, Young Daniel saw Noticed: LUST, SLOTH, & PRIDE.

Young Daniel: Who are you? How do you know my name?

Wizard: I am the last of the Council of Wizards. Sworn to protect the realms from the Seven Deadly Sins.

He saw The Seven Deadly Sins were states.

Wizard: But years have passed, and I grow weak. That is why I seek a champion to inherit my magic.

Young Daniel: You want me to do magic?

Wizard: With this, all of my powers will become yours.

Wizard: Ah. But first… you must demonstrate that you're pure of heart and strong in spirit.

Pride: Don't be his champion.

Envy: We can give you power.

Greed: Your father thinks you're weak. Show him your power.

The Eye of Sin does not touch Young Daniel, Young Daniel's right hand is injured, The Seven Deadly Sins were red eyes are all gone.

Young Daniel: What? What happened?

Wizard: Only the purest of hearts can resist their temptations. But you, you will never be worthy.

The Wizard's magic staff was bangs, The wizard deems Young Daniel unworthy and magically returns him to the car.

Young Daniel saw in the car.

Young Daniel: Let me back in!

Young Daniel: I was just there. This man, this Wizard, he took me to a castle and--

Harry: Stop. Stop! Stop it! You miserable, whiny, little shit! You could have killed us! Do you understand that?

Young Daniel wake up, Young Daniel grabs his glasses, car was accident, Young John wake up, he saw his father was empty.

Young John: Dad? You're okay. You're gonna be okay.

Young Daniel was the shoes back, Magic 8 Ball.

Wrath: Your magic grows weak. Soon, you won't be able to contain us.

The Sins send Young Daniel a message telling him to find them.

Wizard: Seeking Spell, find me one soul who is worthy.

Wizard: No matter how long it takes.

Daniel in is in a jail prison cell penitentiary.

Magic language at doodling the symbols all over the wall.

The mirror to the wall.

Daniel was glasses, he pencil doodling the symbols all magic language to the wall.

Daniel still pencil doodling the symbols all magic language to the all of wall.

The pencil was breaks.

Daniel was left ear to the voice.

The voice: You walking, talking monkeys with your cave drawings.

Daniel saw who is the voice.

The voice: You assume there's only one way to gain magic. No, no, no.

The worm over here to jail wall, Daniel got up stand, Daniel saw the worm, Daniel walking, he saw the worm at jail wall.

Worm: There are more ways than a mind can imagine.

Daniel with the worm.

Daniel: What in God's name?

Worm: I name the gods, Doctor. Not the other way around. Oh, what fun we're going to have together.

Mister Mind: The Seven Realms are about to be ours. I am Mister Mind.

Lady Shazam: Don't beat yourself up, buddy. You're gonna find someone.

Lady Shazam is shown trying to talk to fish.

Lady Shazam: *laughs* Yeah, I'm sure. Because there's plenty of fish in the sea.

Lady Shazam: Guys, of course it's not real. I can't talk to fish.

Lady Shazam: Even if I could, I mean, honestly, what could we do with that that's cool?

Tommy: *scoffs* I don't know, maybe command an army of billions in the ocean. 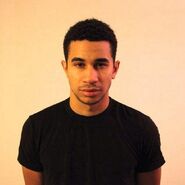