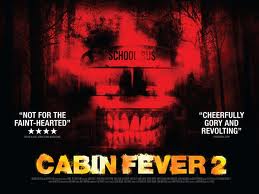 After the events of the previous flim Beck is still trapped in the woods. Seven collage kids and there two profecccers come to the woods to tent camp and they find the cabin with the truck still there but all the blood washed up somehow. One of the collage kids finds papers in an old drawer and reads the pages out loud causing thr demon family to come out outy of the ground and bringing Beck back to the cabin for another terrifying adventure.

Way before the first two events from the Cabin Fever events a family of three Jennifer, Rufus and Emma arrive at the cabin they just bought. Emma finds a diseased dog in the woods and brings the dig into the cabin. Emma starts showing signs of posseion and Rufus attempts to shoot her but Emma jumps out the window with the dog behind her. Rufus and Jennifer see Emma walking around possed. Rufus tells Jennifer to run and he'll shoot Emma. Jennifer runs out the cabin and Rufus shoots Emma but it dose no good. Emma rips Jennifer's throat out and starts walking through the woods. Rufus puts a garbagge bag over Emma's face and shoots her in the head. The leaves come down and make pages. Rufus grabs Emma and Jennifer's dead bodies and barries them in the shed and he goes to the lake dock and shoots himself in the head falling into the lake.

Six years later after showing the recap ending of the previous flim Beck is driving dwn the road and the whole  bridge is gone and Beck attempts to swim but a force field blocks her from leaving. Beck then gets possessd again but when the sun shines down on her it leaves.Beck runs into the woods screaming and crying. Two weeks later two collage profeccers Eddie and Jason always takes his best eight students for a camping trip. They arrive on the bridge which has suddenly appered again and passes Beck's car.

They follow the road up a hill and to the cabin. They notice that Alan's truck is still there and they find blood in it and they assume they hit a deer. They go into the cabin and Eddie and Jason ask eachother if they just want to stay here and he says yeah. Cruz stays in Alan's bedroom and looks in the drawer and finds the pages that Emma had. Then Emma makes Cruz have a flashback of everything that happend to her and her family. Cruz goes outside as it starts rainning and Emma makes him throw up. Cruz see's Emma standing by the bus they took.

Cruz goes in and reads the pages after Emma begs him alot. The pages awaken Emma, Jennifer and Rufus from the dead. Beck here's something coming for her. She see's Rufus running to her and she gets chased all the way back to the cabin. Finch, Daisy, Carly, Merna, Leah, Chase, Xavier and Drew reconzie Beck Wilson the missing girl from the news. Beck tells them what did they do beacuse there's something out there and Cruz said he found some old papers from the drawer and started reading them.

Beck tells them what happend to her and she tells them that they need to lock Rufus in the celler. Beck asks if any of them has been drinking wtaer from the sink or taking baths or showers and they say no she tells them not to do it. Cruz shows Beck the pages and they must nbe the demons that were chasing her. Beck opens the celler and she runs out into the woods and yells and screams fo the demons to come and get her. She sees them off in the distance and the demons chase Beck to the cabin. Beck accidently falls into the celler with Rufus, Jennifer and Emma and the celler door shuts by itslef. Beck locks herself in the other room.

She puts the large dresser on the door in case they got in. Cruz and the others try to get the celler door and (it dose the same way it did from the last flim) Rufus starts growling at them. Drew goes to take a shower forgetting what Beck said. The water starts burning his skin and he passes out but awakes and he is possessed. Cruz and the others are wondering where Drew is and he comes into the living room his skin bunded up. They all fight him dismemebring his body. Beck has an axe and she moves the dresser and runs into the celler and starts hacking at all of them and makes it out of the celler which is then locked again.

Beck goes to the shed to get weapons and see's Reed out in the woods. Beck grabs the same chainsaw she killed Reed in the previous flim and goes off into the woods. The others think that she's trying to make a run for it and Leah goes after them. The trees attack her and twist her body apart killing her. Merna who is going insaine starts drinking tons of water and she becomes possessed and attacks Carly with a knife but Carly bashes her face into the counter killing her. Rufus starts screaming at her and Carly shoves Merna's dead body into the celler.

Jennifer slashes Emma's shoulder but she punches her and fight off Emma and Xavier hide in the closet. Emma and Jennifer bang at the door. Carly finds a secrect passage from inside the walls and she and Xavier walk through the tight space and it ends up breaking from underneath there feet and they fall underneath the cabin which is a pool of blood. They climb out of the pool and reach land and take off running with Emma behind them. They run into the woods where Rufus pops up and sticks his hand in Xavier's head killing him.

Carly runs off into the woods and collapses at a river. She lies down and starts crying unaware that Emma is walking up behind her. Carly gets up. When Emma is behind her she pushes Carly into the water and starts slicing her back open with her arms claws killing her witnissed by Beck who runs away and hides by a log. She looks up and see's Reed but he didn't see her. Beck wonders how Reed keeps on staying alive and suddenly the log is pushed from behind her and they both go rolling down the hill and Beck crashes into a foxhole.

Beck then crawls through the foxhole and into a mass of thorns. Beck see's Reed in the mass of thorns by her and punches him but cuts her hand. Beck tries to get out and can't and becomes emotinoal histerical and fights her way out cutting her body up and falling into a river and gets carried down the swamp and into the river that surrounds the island. Beck goes under the bridge and tries to go on the otherside but the same forcefield from earlietr wont let her and Beck see's Reed in the water with her and swims to the edge of the woods.

Beck turns around to see if Reed is behind her and he grabs her and tries to take her in the water with him and before Beck kicks him into the water Reed slashes her knees with a knife. Beck runs through the woods with Reed behind her and falls into a pit and passes out. After not finding Beck Cruz, Chase, Daisy and Finch come back to the cabin and find everyone missing and that Rufus, Emma and Jennifer are missing. Chase thinks his girlfriend Carly is dead and grabs the double barrel shotgun that is hanging in front of the fireplace and holds all of them at gunpoint and demands them to go in the woods to look for Carly.

Daisy, Finch and Cruz goes out into the woods and to the creek where Chase drinks out of the water and Daisy, Finch and Cruz runs off into the woods and they here Rufus, Jennifer and Emma off in the distance and they run back to the cabin. Chase is walking to the cabin where a possessed Beck stabbs him in the back and Chase shoots her in the head but it dosen't do anything and Beck throws him in front of the cabin. Daisy opens the door and stabs a possessed Chase in the head. Daisy runs in to Carly and Chase's room and finds the secrect passage and goes in it and climbs down the hole. The blood is now gone and there is weeds underneath the cabin.

Daisy dosen't see no one and runs to the shed and locks it. A hand grabs her head through the window and Diasy grabs a knife and stabs Chase with it and then starts sawing his hand off. Daisy gabs a chainsaw and goes outside with it and saws Chase to death splitting his body in half. She looks back and see's Beck having a sezuire on the ground. Daisy starts running to her but Jennifer pulls her away and she falls on the ground. Beck awakens from her sezuire just as Jennifer is about to bring the axe on her head. Daisy cuts Jennifer's legs with the chainsaw and she falls to the ground.

Beck grabs Jennifer's axe and starts bulegoined her to death. Beck and Daisy go inside the cabin and find Cruz and Finch. Beck tells them that they have to kill Emma and Rufus but she dosen't know if the place will let them leave or not. Finch stands in the hallway just as a large soike goes through his body killing him. Daisy, Beck and Cuz run outside where they find Emma and Rufus comes out of the cabin with the same large spike. A possed Carly, Leah and Xaiver come out of the woods. Reed comes out of the woods too with a pickaxe. Beck bashes Xavier's head in with a rock, Daisy stabs Carly to death and Cruz beheads Leah.

Rufus and Emma attack them. Beck tries to look for Reed but can't find him and beheads Emma before chopping her legs off with the chainsaw. They all gang  up on Reed stabbing him cutting him up with the chainsaw and they all bash his face in killing him. Beck see's Reed with Jennifer's huge axe and bashes it on teh grounnd causing everything to shake and they all fall to the ground. The ground cuts in hafe and they start moving down the lake Beck is finally glad to get away from the cabin.

They float to an island. Beck notcies a woman that is lying in a weird way in the sand and she goes to touch her and the woman comes up screaming but the woman is really a creature and the screen cuts black.

Retrieved from "https://fanon.fandom.com/wiki/Cabin_Fever_Part_2_Fresh_Blood?oldid=178505"
Community content is available under CC-BY-SA unless otherwise noted.