Reed lives at a store with his disbled brother Adian, Gary and his boyfriend Rob and there Mom Tammy and Dad Rick. Adian starts calling Reed a dick and a fucker and Reed tries to slap him but Adain grabs his hand and bites it not knowing that the disase came form a lab station, a scientist is experimenting with a nuclear c 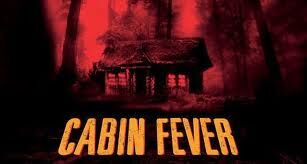 ure for diseases while another scientist is experimenting on a diseased dog. The scientist accidentally spills some of the dog's blood into the nuclear chemicals, spreading its disease. The scientist brings his experiment to a local hospital, where they inject it in a sick patient. The sick patient's great grandson, Adian then comes in and hugs his grandpa not knowing the disase spreading inside him.

Reed go's inside the bathroom and the disease spreads up hsi arm and he takes all his colthes off and steps into the shower where the disease takes over his body causing his skin to harden and turn an ugly brown that is mixed in with blood. While Gray and Rob are having sex Reed hacks them to death, then he kills his Mom and he and Dad fight but Reed eventually kills him. Reed then go's outside and chops Adian's head off and walks up the private road with his fog to the cabin.

After Beck is realised from a mental institution her brother Ethan and there three friends Nicole, Helen and Allan take her to a cabin Ethan rented in the woods for the week. That night while the five friends are by the fire Beck go's out into the woods where she finds a guy in the river and the dog asleep by him.

Beck is about to touch the guy when he wakes up and chases her back to the cabin. The guys askes for help and starts barfing blood everywhere. Beck, Nicole and Helen go inside and watch from the window. The guy breaks into Allan's car and barfs blood everywhere and Allan beats him with a stick and Ethan dose also and the guy go's unconsionus.

They tie the guy to one of the trees out in the woods and set him on fire after the guy begs them not to hurt him with the girls coming outside and witnessing it. Allan get's amd when he cathces the girls but Ethan calms him down and Allan makes Ethan, Beck, Nicole and Helen go back to the cabin while Allan puts his body in the river.

When Beck gets back from the cabin she drinks a lot of water and go's to sleep. She wakes up and finds blood all over her body. The others thinks she's on her period but when she barfs blood numerous times in front of them Allan tries to lock her in the cellar but Beck escapes and gets in Nicoles car and drives down the road with it and barfs blood all over the window causing her to crash her car in the lake.

Beck gets out of the car as soon as it rains and walks on the road in till the guy's dog chases her back to the cabin and Beck locks herself in the shed where she drinks poison. She leaves the shed and beats the dog to death with a branch and go's inside the cabin where she collaopses on the ground. The others find the dead dog ad confront her about it but Beck locks herself in the bathroom where sehe takes a shower and ends up barfing blood everywhere in the shower.

Ethan finds the key to the cabin and unlocks the bathroom and finds blood everywhere in the shower and Beck lying on the ground. He tells the group that he's taking her back to the hosiptial and he leaves in his car and drives to the bridge but it flooded due to the rain and with no choice he go's back to the cabin where Nicole tranqulizes Beck.

That night Beck comes into the living room with a knife and falls to the ground and the cellar mysteriously opens. Nicole runs to grab the knife but Beck pinns her to the ground and barfs blood in her mouth and she and Nicole fall into the cellar. Beck and Nicole fights with them breaking the mysterious box in the earlier and a tranqalizere rolls out. When Nicole and Beck fight Nicole knocks Beck out and she notices a Cabsa on the ground.

The cabasa go's into anoter room and Nicole go's in and picks it up but drops it when the posseion takes over her body causing her arms and head to turn around and she sits on the floor as blood flys out of her mouth and her body moves up and down and Beck comes into the room. Nicole stars coughing which stops the posseion and brings her back to life. She and Beck fight and Nicole manges to run out of the celler and they lock the celler.

Allan here's the mirror breaking and go's into the bathroom and finds a bathtub full of blood. Nicole comes out of it her face all cut up from the mirrior she pulles a shard of glass from the bathub and cuts her face more and steps out of the bathtub making the door shut just as Alan falls down on blood on that is on the floor. Nicole stabs him in the shoulder with the glass and Alan eventually bashes her head into the sink killing her.

Ethan comes in and takes Allan in to treat his wounds in the shed whie Helen stay in the living room where Beck taunts her but finally disapers into the cellar when Helen screams at her and runs into her room. Helen heres Beck calling her name in her regular voice and walks into the living room and relutcnty go's into the cellar where she finds Beck crying and Beck bites her arm and pinns Helen to the stairs where she slices her tongue with a knife and drops it into her mouth.

Helen grabs Beck's knife and stabs her in the neck with it and runs out of the celler locking it. Helen washes away the blood while Beck sings sweet caroline and she starts cussing Helen out and Helen runs out of the cabin and go's into the shed and Ethan and Alan are missing and Helen is about to run into the woods when loud piercing nioses and growls fills the air and Helen runs into the cabin where she noitcies the disease spreading up her arm.

Beck tells her to cut it off and Helen finds a drill and cuts it off. Ethan and Alan are looking for Reed when they find him in the river they then follow the river to the cabin realise that the disase is in the water. They find Helen outside the cabin freaking out over the loss of her arm and she beggs them to leave but they say that the bridge is probably still flooded.

Helen pulls out an ax and attacks them with it and during the fight Allan hits Helen with causing her blood to go on it but in the end Helen wounds Alan again. Ethan bashes Helen with the shovel and draggs her body ito the cabin setting it on fire. He drags Alan into his room. Ethan go's into the cellar with a tranqulizer and afte a fight with Beck he stings her with it and ties her into the electric shock chair in the cellar and suffactes her killing her but he shocks her back to life and she returns to normol with her tongue back and any other injuries.

Beck leaves the celler and the doors close on its on locking Ethan in. A possed Alan comes out and attacks Beck and they fight and Beck hides in the closet where Alan shove sthe machete in and out if the wall but Ethan bashes his head in with a shard of a broken vase and he throws Beck out of the cabin and locks her out just as demon Reed comes out of the cellar his body burnded to death.

Ethan stes the cabin on fire killing him. Beck stumbles away in shock and finds the picture that she, Ethan, Alan, Nicole and Helen took earlier. Reed crawls out of the fire and Beck runs into the shed and grabs a chainsaw cutting Reed's legs off and finally killing him.

Beck then walks away with the picture in her hand.