Bubbles is the main character and host of Splash and Bubbles Super Why!, now known as The Reeftown Rangers. She is a pink mandarin dragonet who loves getting messy. She is the leader of the Reeftown Rangers, a group of tropical fish who solve their problems by going into books and changing the stories.

Leader of the Reeftown Rangers

Your Highness (as Princess Cerulean)

Shuriken and shadows (as Ninja Dragonet)

Why-writer (as both ND and PC)

Being pretty (as Princess Cerulean)

Pink and blue (Normal and as Ninja Dragonet)

Her owner's (caretaker's) house on the beach above Reeftown's surface

Stories not having a happy ending

Bubbles has dark pink skin on the front half of her body, which is her head, and her back half is dark blue. Between her head and her back half is a teal stripe. She uses her big pelvic fins like arms to grasp objects, even if not very well. All of her fins are orange with purple tips and pale green spots. Her eyes are red with pale blue eyelids.

Bubbles loves to get messy and dirty, whether it is in a mud puddle or slime, but can become bored and upset if she can't find mud to play in. She is a huge tomboy. She is very caring and gentle and is a nice friend to everybody.

Her superhero form as one of the Reeftown Rangers is Ninja Dragonet until Season 2. She looks like a half-fish, half Greninja, although it is implied that her species can naturally choose to look like this. Around her head covering her mouth is a pink tongue resembling a Greninja's. She has spherical white bubbles above each eyes, her pelvic fins are replaced by three-fingered arms, and she has a green shuriken and blade on each of her sides. She can control shadows, something she can't do in her normal form.

Princess Cerulean is her new superhero alter-ego starting in Season 2. Her skin is now bright teal with a scattering of darker blue teardrop markings. Her body is physically almost identical to her normal form, but her fins have a slightly more wavy shape. On her head, she has a small gold circle-around crown shaped like that of Princess Pea with a red jewel in the center. The upper edges of her eyes have thick eyeliner/eyeshadow-like lines that extend down to the outer corners of her eyes.

Princess Cerulean is referred to by the storybook characters as "Your Highness." She can no longer use shadows, but still has her Why-writer, which is blue and glittery, to change characters' stories to have a positive outcome. Her personality is also different from normal, being a huge girly-girl who loves tea parties and dolls.

As her new alter-ego, Princess Cerulean. 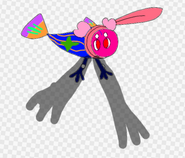 As her first alter-ego Ninja Dragonet.
Add a photo to this gallery
Retrieved from "https://fanon.fandom.com/wiki/Bubbles_(S%26BSW)?oldid=502187"
Community content is available under CC-BY-SA unless otherwise noted.