Archibald, also known as Chronos or Imperius by Gabriel, is one of the first Archangels created by God to fight against the Darkness and is the Chief Angel of the Seventh Heaven . He is widely known to be the first wielder of the Spear of Destiny, and his mastery of Time and was also one of the Archangels protecting Chuck Shurley, and is also part of the Grigori with Owen Pendragon has his True Vessel. He is immensely close to his three sisters, Mavis, Gabriel and Auriel and the three look up to him has a brother and father figure to them when God vanished, and a role-model for Gabriel and Mavis.

God made Archibald and the Archangels to combat against the Darkness alongside Him.

Archibald was one of the Archangels to witness and fall of the Archangel Lucifer. After 330-1000 years, a unexpected attack happened on Heaven at Omega's place and teleported there to see Omega cradling a dead Angel's body. Archibald, knowing what would happen, went to the High Angelic Council, and God stated that Lucifer declared war, with Archibald has one of the 4 Archangels to help God fight Lucifer and his 3 Satans.

Archibald and the 3 Archangels were combating Lucifer and when God vanished, they started a unknown incantation that allowed the 4 Archangels to finally seal Lucifer into Hell, and inside the Lucifer's Cage or The Cage, but that did not stop the War has there were the 3 Satan's and the 5 Demonic Death Gods leading the Lucifer's Demonic Legion.

When Dean went and grabbed Chuck and took him to the motel where Sam and Lilith was, and just before Lilith could do anything, a bright light appeared outside, and who room starts to shake has the Archangel Archibald descends from Heaven to protect Chuck, however Lilith escapes before he reaches there, and so he ascends back to Heaven, and everything stops. 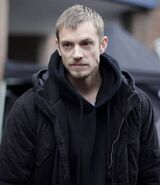