All Todays Prehistoric Cenozoic Animals are a group of formerly fictional outdated-looking animals that were brought from the DeviantArt series, All Todays, into real life North America.

During the early days of the Cenozoic era, one group of (possibly reptilian) creatures called protomammals started to diversify and ranged from the tiny shrew, to the large elephant, to a massive indricothere, to the biggest of them all, a predatory flesh-eating blue whale. Here's the examples of some of these protomammals. 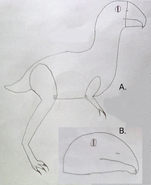 Terror birds, despite their names, they were probably protomammals instead of birds, they were scaly and had beaks, which evolved to be similar to that of birds, but as some research shows, they probably had lips over beaks to prevent wearing of their beaks.

Smilodon, aka the saber-toothed cat (or saber tooth tiger), was a large protomammal resembling a Gorgonopsid of the Permian period. Some researchers argued that they had lips over their saber teeth while few argued that they didn't have lips.

Toxodon, only its skull was found and we could only speculate on what this herbivore would have looked like, they may have been fully-aquatic with paddle-like tails for swimming side-by-side like a crocodile or a lizard.

Chalicotherium, its strange skeleton showed that it may have been weirder in life, so it may have walked bipedally like other extinct animals such as humans, dylanuses, and among others. Unlike them however, Chalicotherium was most likely just purely herbivorous.

Brontothere, known from some complete skeletons, these herbivorous protomammals may have lived in herds and competed against rhinoceroses (another extinct animal) for food and territory.

Arsinoitherium, a herbivorous protomammal that lived in scrublands, as the front snouts suggests, these herbivores may have had Iguanodon-like beaks. Most scientists agree that they had sturdy pillar-like limbs to help support their bodies, but some argued that they had strong gripping clawed feet to dig into Earth, making it one of the largest burrowing animal on Earth.

Basilosaurus, a whale-like fully-aquatic carnivorous protomammal with a paddle-like tail for swimming like a fish or crocodiles. They were likely apex predators as very few fossils of these predators were found.

Ground sloth, these large herbivores were likely close relatives of Chalicotherium, but unlike them, they're too front heavy to walk or run on back legs. Ground sloths were like their neighbors of the Cenozoic, therizinosaurs and prosauropods, in many ways.
Add a photo to this gallery

It is unknown why that the protomammals, along with most mammal species, had suddenly became extinct at the end of the Holocene period.

Retrieved from "https://fanon.fandom.com/wiki/All_Todays_Prehistoric_Cenozoic_Animals?oldid=447686"
Community content is available under CC-BY-SA unless otherwise noted.