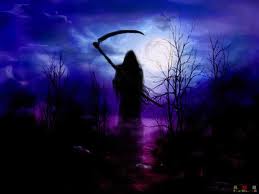 A woman named Ann Lewis arrives at The Glass Mansion with her baby Alice May. Charlene Culver shows Ann around and tells her that there is a suprsise for her in the basement. Ann leaves Alice in a high chair in the kitchen while Charlene goes outside to smoke. Ann goes into the basement and looks for her suprise and can't find none and when she is about to leave a person in the grim reapper outffit hacks Ann to death with the axe.

The police found Alice still in her highchair and Charlene Culver missing and Alice's Dad went missing police figured that Charlene Culver did it then ran away with Ike Lewis. Alice was then sent to live with Ann's sister Lena Lewis and ten years later Alice who goes by Miriam now lives in a soroity with Lena as the housemother. Today is Alice's Birthday and she and her soroity sisiters are having a pool party. Her bestfriend Tiff who is the presidant and her other bestfriend Ruth, Rain, Chrissy, Holly, Jasmine, Danielle, Mary, Caroline, Mary Beth

Retrieved from "https://fanon.fandom.com/wiki/Alice_In_Murderland?oldid=257377"
Community content is available under CC-BY-SA unless otherwise noted.