Demon of the Satsui no Hado

Akuma is a playable character in the crossover fighting video game, Marvel vs. Capcom: Armageddon. His return in this game was officially revealed on August 16, 2019, along with many other characters who appear as well. Akuma is classified as Capcom fighter #7.

This character is available at the start.

While some people often refer to Akuma as a shoto clone (characters who fight identically or similar to Ryu by utilizing his attacks, usually possessing a projectile and anti-air special, with a physical distance coverage optional), he has more than enough moves to distinguish himself from his lighter counterpart, utilizing a very different playstyle. Back in his earlier appearances, Akuma/Gouki simply had his moves as a combination of both Ryu and Ken's; his Hadouken was both as slow and strong, his Shouryuuken did multiple hits with Ryu's damage, and his Tatsumaki Zankuukyaku did multiple hits like Ken's and knockdown like Ryu's, giving him juggle capabilities. His overpowered damage output was balanced by giving him very low health, making him a classic example of a Glass Cannon in most of his appearances after most of Street Fighter II. His low health storywise is shown to be Akuma holding back his true power in order to enjoy his fights. Most of his recent versions are often balanced, though some game-breaking tools still tend to exist. 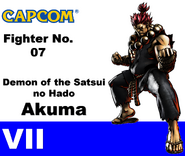